Small Seal Characters 小篆 xiǎozhuàn
The problem of one character corresponding to multiple glyphs also existed in ancient times. After the first emperor of Qin (Qin Shi Huang) unified China, he adopted Small Seal Characters as the standard script used throughout the country. The unification of the glyphs this time had a profound impact on the standardization of Chinese characters.

Cursive Writing or Grass Stroke Characters 草書 cǎoshū
Cursive script is a font created on the basis of Official Script for the convenience of writing. Some strokes are omitted during the rapid writing of Chinese characters. Now the artistry of cursive script is greater than its practicality, because their glyphs are often illegible to the untrained eye.

Taking “魚 fish” as an example, the evolution of Chinese characters is as follows: 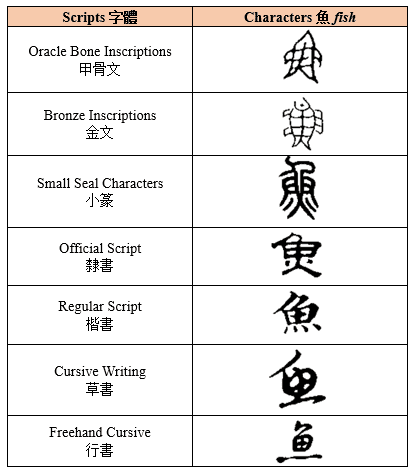 Let us narrow down the scope a little bit. According to the List of Commonly Used Modern Chinese Characters issued by the National Language Commission, there are 2,500 commonly used Chinese characters and 1,000 frequently used characters. A study conducted a test on a corpus of 3 million characters and found that the coverage rate of 2,500 commonly used characters was as high as 97.97%. In other words, after knowing 2,500 Chinese characters, you can “read” most of the Chinese writing.

If you want to learn more about Chinese characters, you can also watch the following video: